The Thurloe Estate was originally a wedge of land within the larger Henry Smith’s Charity Estate and was owned by descendants of Sir William Blake (d.1630). It became the Thurloe Estate when Blake’s descendent, Anna Maria Browne, conveyed it to John Thurloe (1616-1668), Oliver Cromwell’s Secretary of State who was presented with land in Brompton by Cromwell for services rendered during the Commonwealth.

In 1799 the estate passed to John Alexander, a descendent of Anne Marie Brown’s first marriage and godson to John Thurloe Brace’s son, Harris Thurloe Brace. The greater part was then being cultivated as Harrison’s nursery garden, started some fifty years earlier.

John Alexander did not begin development until 1826 when he drew up an agreement with speculative builder, James Bonnin, to develop Alexander Square fronting onto Brompton Road together with South Terrace, Alexander Place and North Terrace to the east: an area of about 4 acres. The agreement stipulated that the building should conform to the design of John Alexander’s surveyor, most probably the architect George Godwin the elder, and be leased to Bonnin for a term of eighty years ‘by parties whose respectability is of great advantage to the Parish’ The houses were faced with good malm stock bricks stuccoed on the ground storey with projecting balconies to the first floor. The influence of George Basevi (1794-1845), already surveyor to Smith;s Charity Estate, can be surmised from the round headed, six-panel, studded front doors, probably based on the Parthenon in Rome, with ‘large handsome ‘fanlights. The design may also have been influenced by John Soane for whom Besavi had been a pupil.

After John Alexander’s death in 1831, the work was continued by his son, Henry Browne Alexander. A second phase of building, begun in 1840 and designed by Basevi, saw the extention of South Terrace, Alexander Place and North Terrace, the construction of the Western Grammar School (by Pocock) followed by Thurloe Square, Thurloe Street and Thurloe Place. The Bonnins, father and son, were prominent during the early stages of development, but three other builders were very much to the fore, Thomas Holmes, John Gooch and Henry Williamson.

Thurloe Square, laid out in 1840 and completed in six years, is built in grey gault bricks plentifully dressed with stucco which empathizes the rectangularity of the overall design in contrast to the luxuriance of the neo-rococo ironwork of the balconies. Development began on the south side followed by the north east, south east, north west and south west sides and each terrace differs slightly from the others. Each terrace differs slightly from the others and the 3-storied stucco porch on the return face of the north-east corner house is an unusual feature.

Basevi’s first proposals for the communal garden in Thurloe Square showed a central carriageway, echoing that of Alexander Square, but this was modified before the start of work. The present layout of serpentine pathways, numerous mature trees and densely planted shrubberies, borders and flower beds, follows his design. All lessees of houses in the square were granted the privilege ‘under due regulation’ of walking in the communal garden, which was to be maintained out of an annual charge levied on the lease of £3.10s. This money was also to cover the cost of maintaining roadways and lighting the square.
The original cast iron railings around the garden were removed in1939 as part of the war effort and replaced by the Estate in 1977.

Householders in the Square included Lieutenant-Colonel HB B Smith of the
Madras cavalry who incurred the displeasure of the ground landlord by erecting an observatory on the top of his house and Sir Henry Cole (1808-1882), campaigner, educator and first Director of the Victoria and Albert Museum, who lived at No.33.

The south-west corner of the square was demolished in 1867 to make way for the underground line and South Kensington station by the Metropolitan District Railway Company. A block of seven new artists studios, No.5 Thurloe Square, was built on the south side in 1885-87 and No.52 Thurloe Square on the west followed 1889.

Thurloe Place was begun in 1842 along the south frontage of what was then called Old Brompton Road with Thurloe Square making a sizeable break in the middle.
The western part ran from the north west corner of the square to the Hoop and Toy public house, though only Nos.18-20 still remain, and the eastern part comprised Nos 12-16. Although the design cannot with certainty be ascribed to Basevi, some features of the western terrace echo those of Thurloe Square.

Thurloe Street, originally Alfred Place, was begun in 1844, partly demolished for the underground line in 1866 and then cut through in 1867 by the extension of Exhibition Road by the railway companies to provide access between the station and the new Cromwell Road.

Surrounding buildings include the Brompton Oratory begun in 1880 and designed by Herbert Gribble, who lived at No.10 Alexander Square and is commemorated there by a Blue Plaque. Alfred Waterhouse was the architect of the Natural History Museum. opened in 1881 and In 1899, Queen Victoria laid the foundations of the Victoria and Albert Museum, designed by Aston Webb. The Ismaili Centre, a striking modern design by Casson Conder Architects, was begun in 1980 and has a rooftop garden.

Son of a City merchant and a cousin of Benjamin Disraeli. He was a pupil of Sir John Soane and then spent three months studying in Greece and Rome before setting up his own practice.

Died at Ely cathedral, where he is buried after falling through an opening in the floor of the old bell chamber. (Strangely enough, almost the same fate befell Herbert Gribble (1847-1894), architect of the Brompton Oratory and a resident of Alexander Square). 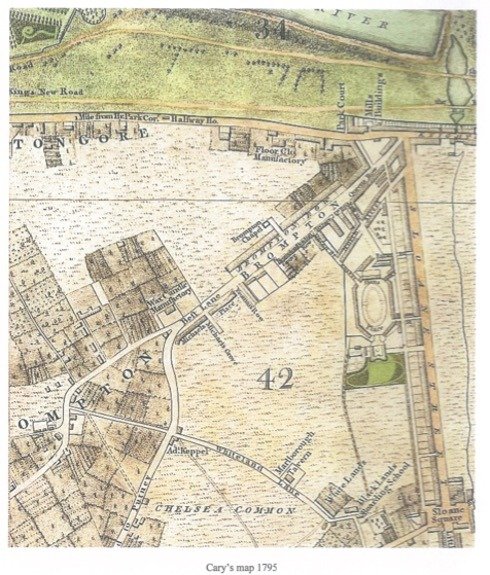 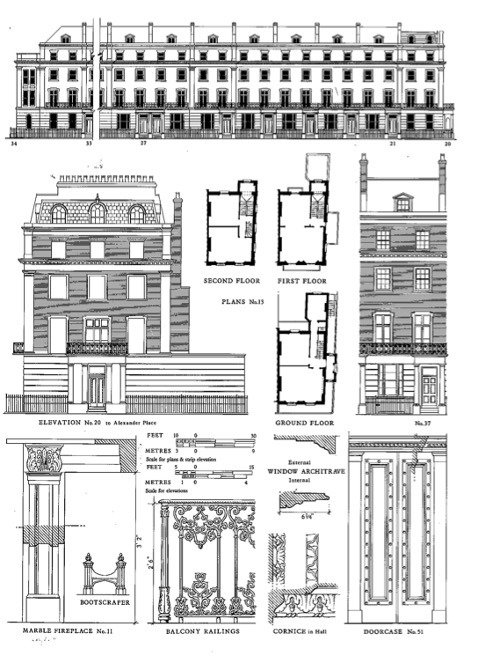 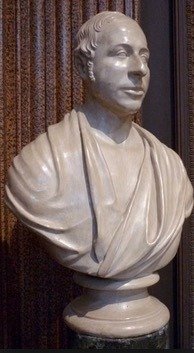 THE DEVELOPMENT OF GARDEN SQUARES

1631: The history of London squares begins with Inigo Jones whose houses and
and church in Covent Garden were started that year with Lincoln’s Inn Fields following in1638.

1660: Bloomsbury Square was the first square to be called by that name and was soon followed by others.

1660: St James Square, first laid out by Thomas Bridgeman, modified in 1728
after the St. James’s Square Act of 1726 created a board of trustees with
powers to charge residents for maintenance, then remodeled by John Nash in 1817 with winding walks and extensive shrub planting.

1666: The Plague and the Great Fire made 100,000 homeless and Londoners were attracted to the more spacious and healthier, way of life offered by
landowners outside the City Walls.

1681: Soho Square was the first to have a properly laid out garden surrounded by iron railings with ornamental flowers, shrubs and trees.

1722: Publication of Thomas Fairchild’s The City Gardener – ‘I think some sort of Wilderness-Work will do much better, and divert the Gentry better than looking out of their windows upon an open figure’.

By the mid-century, many of London’s garden squares had communal gardens only open to resident key holders. Towards the end of the
century they began to be laid out in the landscape style made popular by designers such as Capability Brown. This was the ideal of rus in ubis as Thomas Fairchild had urged. Many were enclosed with cast iron railings, though the naturalistic style could sometimes be carried to extremes: Cavendish Square had sheep grazing behind the railings. Although most of the original railings were removed in 1939 for the ‘war-effort’, they were never used: happily, many have now been reinstated.

1840: Development of the Ladbroke Estate where Thomas Allerton introduced ‘town’ and ‘country’ zones and enclosed the communal garden squares behind the surrounding terraced houses.

1931: The London Square Act gave protection to 461 squares and other green enclosures but did not apply to underground car parks. 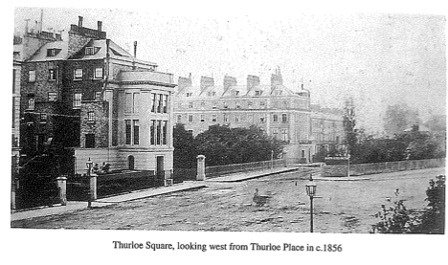 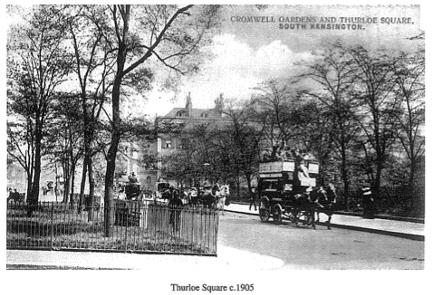 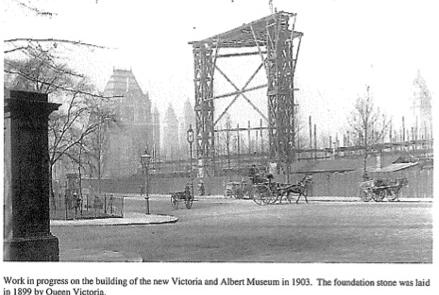 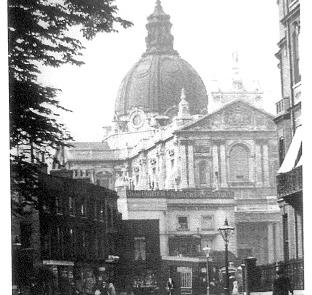 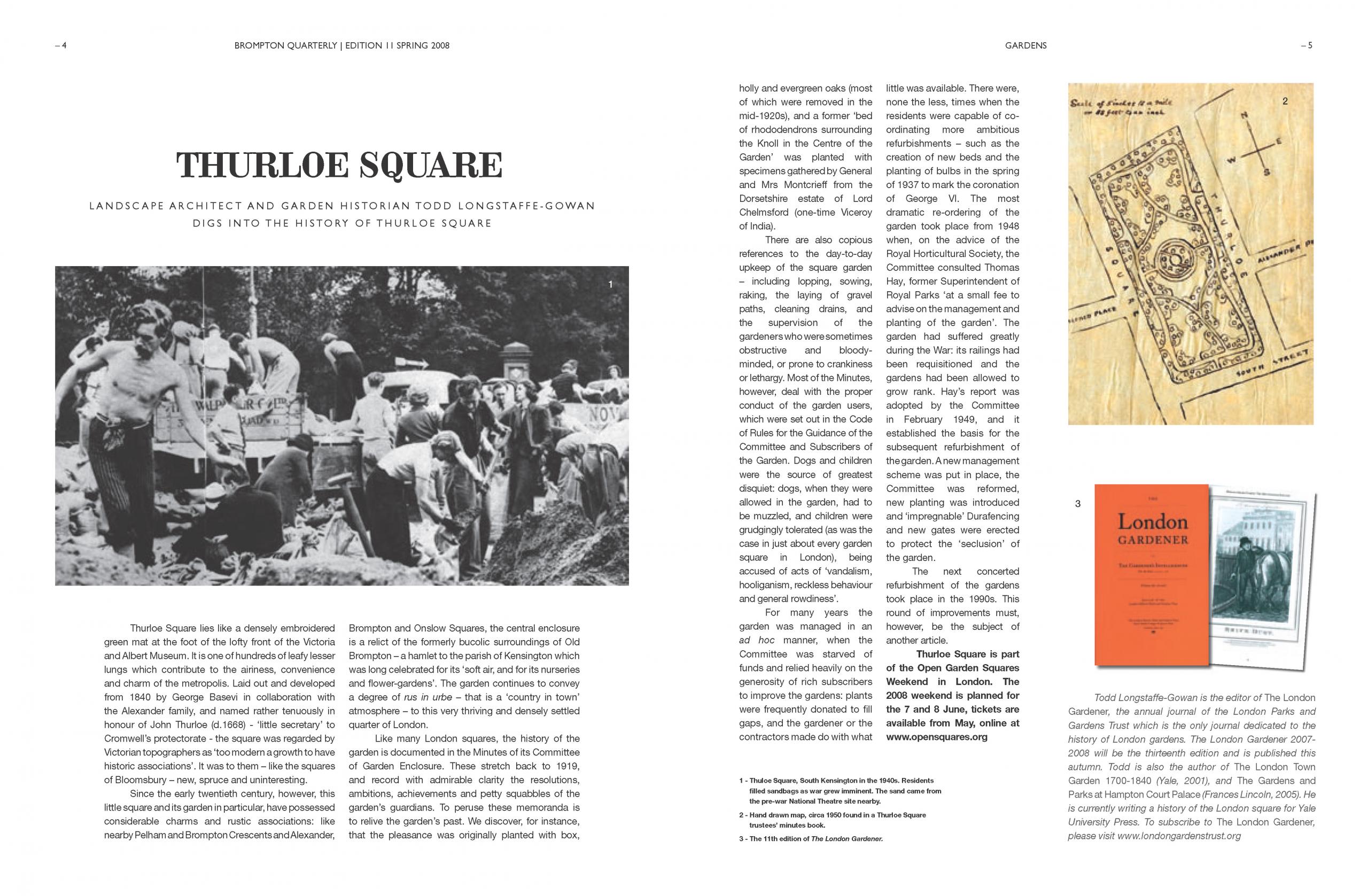